Nationwide Price Per MHz-POP Statistics at End of Round 46:(1)

(1) The prices per MHz POP provided on this site assumes that the all POPs within these county-sized licenses are unencumbered.
As an overlay auction, this is the approach the FCC took. This is not the price per MHz-POP based on truly unencumbered POPs.
Please read the section below called "Deep Dive: Channel Availability in 2.5 GHz Overlay Licenses" for additional details on
the level of encumbrances found in each license.
(2) Because the FCC released its data for this auction using 2010 Census Data,
we use 2010 Census population estimates except where explicitly stated otherwise (as is the case here).

(A Preview of Demand Analysis Below)

Click Here for Interactive Map & Prices for Each Category 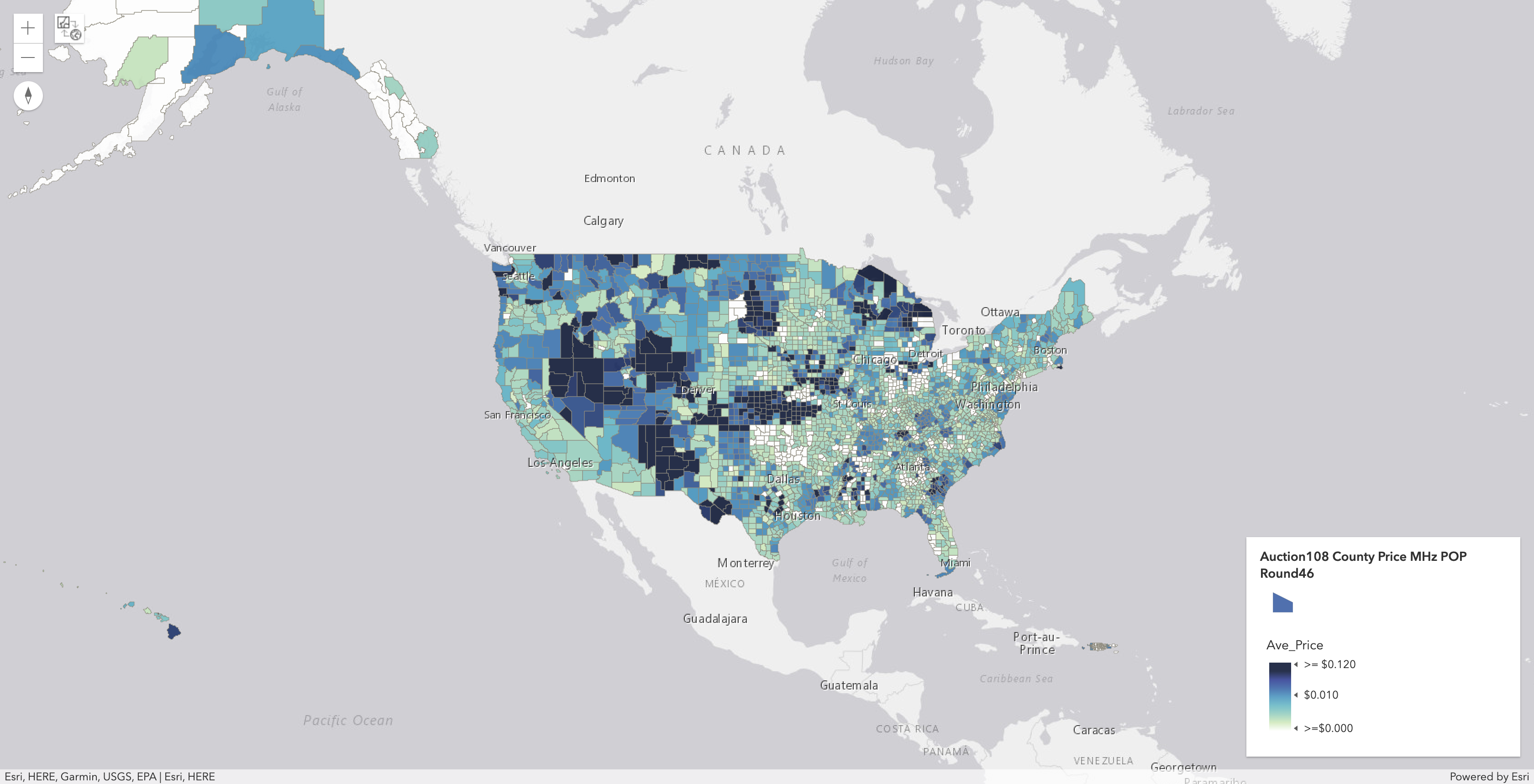 Price Per MHz-POP for All Products in 20 Largest Counties by Population after Round 46:

20 Most Expensive Counties by Price Per MHz-POP after Round 46: (ave. for all categories)


20 Most Expensive Products by Price Per MHz-POP after Round 46: (any category)

The FCC is selling these county-sized overlay licenses in each category unless the current incumbents cover 100% of the area of the county. The FCC considers these licenses as "fully-encumbered" and not for sale. Roughly 72% of the U.S. population will have at least one overlay license available for sale in this auction. However, as overlay licenses, winning bidders may not get full access to these spectrum licenses. Because incumbents still have a right to operate in these bands, the winning bidders will either have to avoid and protect incumbent operations or negotiate for their removal. This is why this auction is sometimes called a "white space" auction and the FCC calls these "encumbered" licenses.

The FCC has provided very nice maps of the current incumbents in each category of the 2.5 GHz band and the number of channels encumbered. We show them below, but interactive versions these maps and helpful legends can be found on the FCC's Auction 108 Mapping Tool.


FCC Encumbrance Maps
Here is the FCC's map of Category C1 (or Block 1) licenses color coded by the number of channels encumbered by current incumbents.

Here is the FCC's map of Category C2 (or Block 2) licenses color coded by the number of channels encumbered by current incumbents.

Here is the FCC's map of Category C3 (or Block 3) licenses color coded by the number of channels encumbered by current incumbents.

Finally, the FCC also provided information regarding pending Rural Tribal Applications, whose applications if accepted, would further reduce the spectrum available in counties that cover tribal areas.


We took this excellent data (including tribal applications) to do our own GIS analysis. In particular, we intersected the shape files of the licenses held by incumbents in each category and the shape files created by the tribal applications with 2 x 2 km cell population data (2010 Census)(3) to determine the population-weighted average number of channels in each county license that would be encumbered. We used the population-weighted number of channels encumbered to classify licenses in each category into "encumbrance classifications" that we can then use in more granular pricing analysis.(4)

(3) Using 2020 Census data, we found that the percentages are very similar so we stuck with the same data as the FCC is using.
(4) Because not all channels are of the same MHz in size, using the FCC's shape files, which are classified by number of channels encumbered, does not perfectly translate to MHz-POPs. However, when I applied the unencumbered channel percentages to MHz-POPs, the resulting nationwide number was in line with the 16.5% "white space" discount that FCC previously applied to spectrum in this band for spectrum screen purposes. Because of this fact, and the fact that I am using these encumbrance classifications strictly for categorical reasons rather than specific calculations, this approach should be sufficient.

More specifically, these encumbrance classifications are:


To help visualize the level of encumbrances in each county based on population (which the FCC maps did not analyze), we have mapped this data into an interactive map which allows you to see the population-weighted number of channels that are encumbered for each category in a county-sized license area. Keeping in mind the caveats above (including about different licenses sizes as noted in footnote 4), these visualizations make clear those areas where wireless operations may not be possible for the winners of these overlay licenses.


Encumbrance Classifications for All Categories of Licenses: 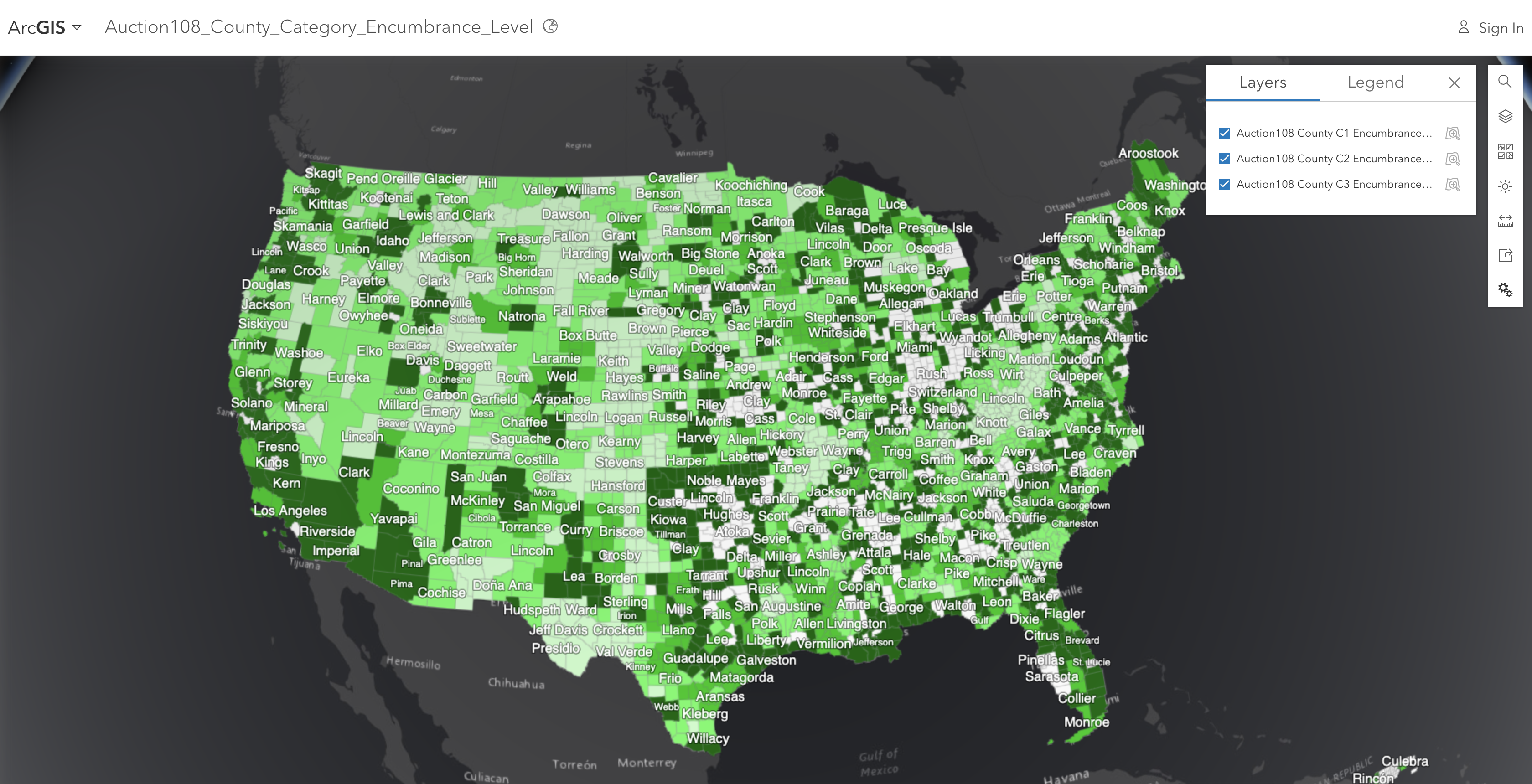 Below is some analysis based on these encumbrance classifications. While not a recalculation of MHz-POPs, the data demonstrates how level of impairment can impact pricing.


Gross Proceeds and Price Per MHz-POP By Encumbrance Classification after Round 46: 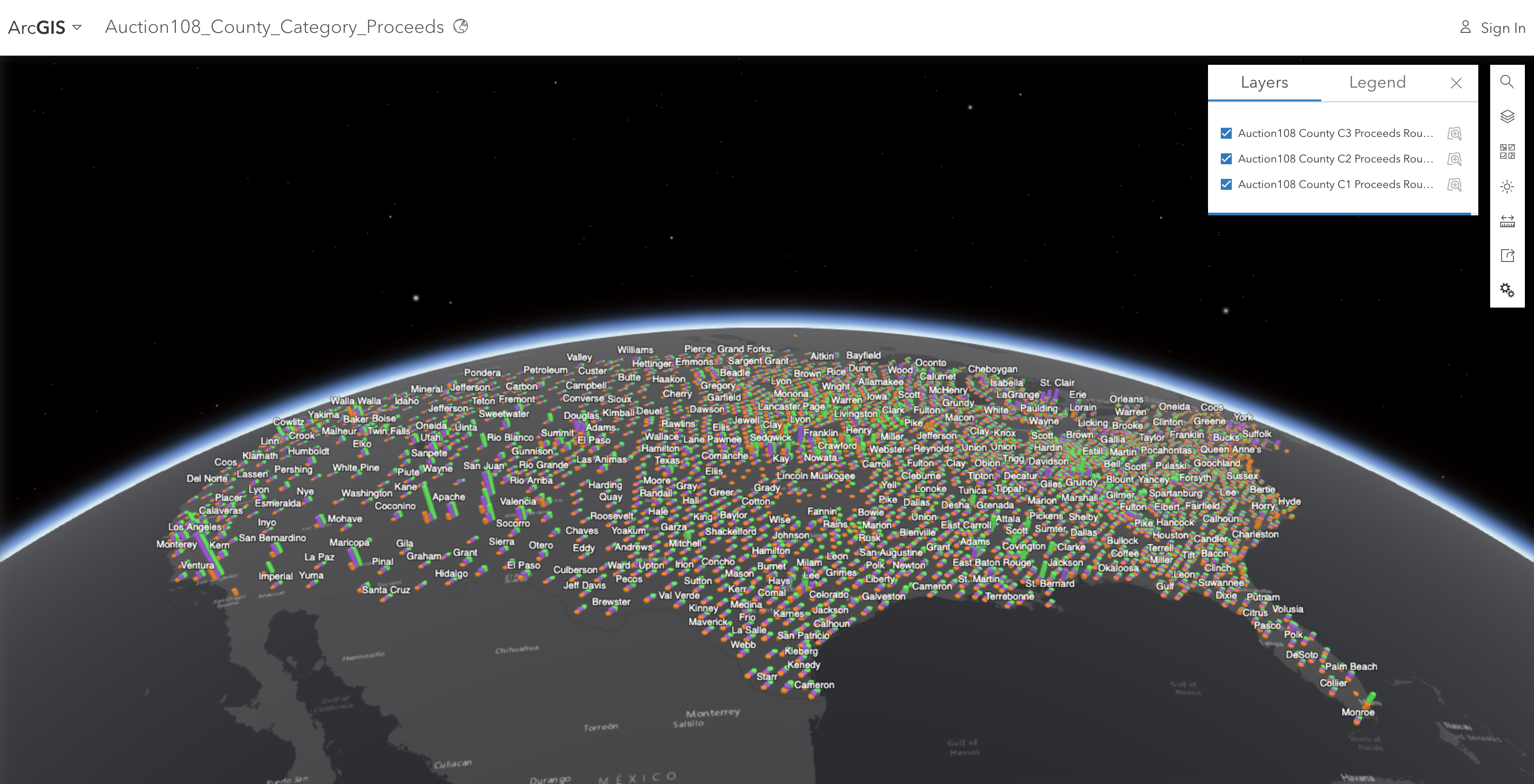 Treemap of Gross Proceeds in Highest Grossing Counties (Above $500K Threshold) after Round 46: (sum across all categories)

Demand Analysis
Excess or Net Demand (Demand-Supply) in Each County after Round 46:
(across all categories in each county) 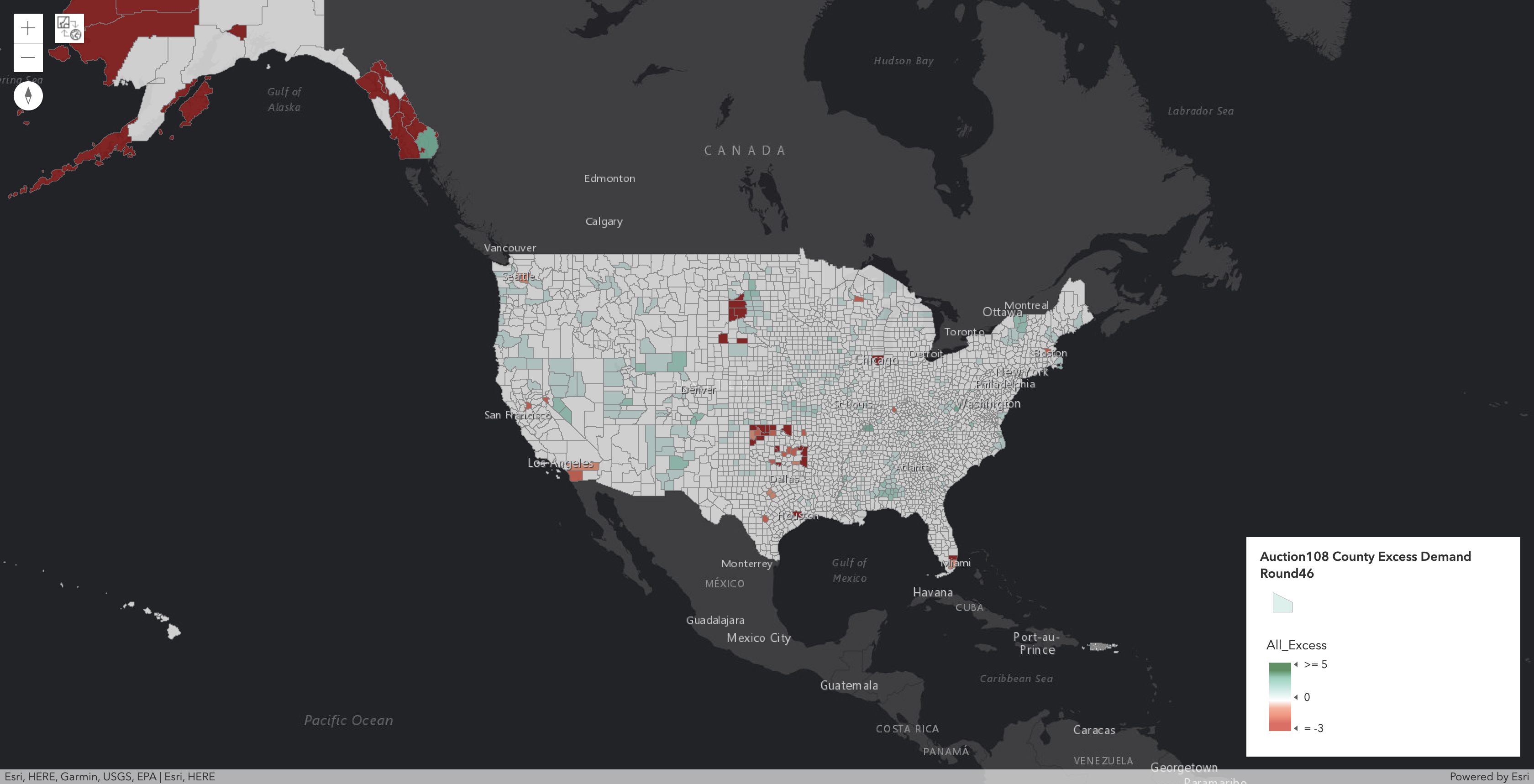 Change in Demand in Round 46 from Prior Round in Each County:
(across all categories in each county) 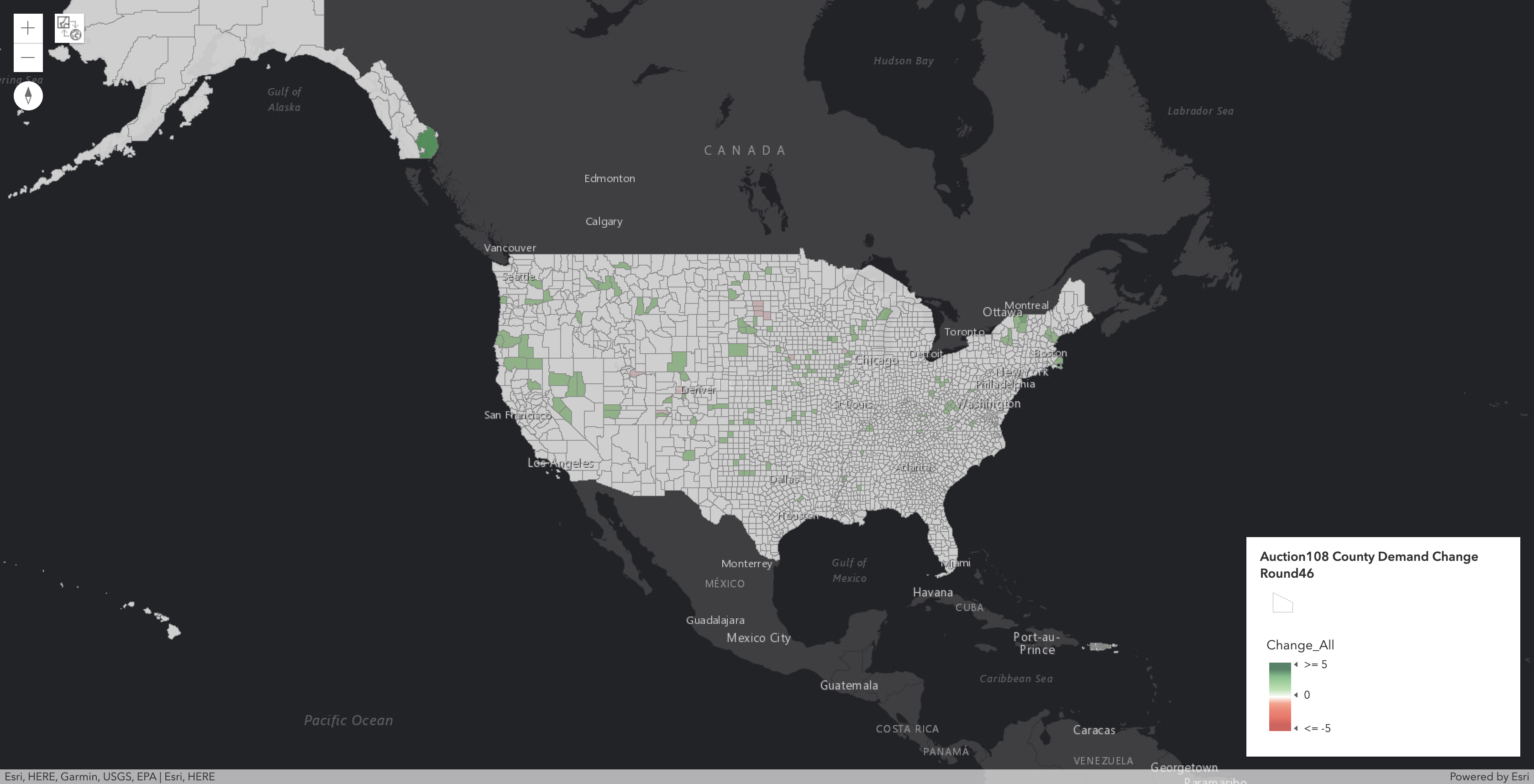 20 Counties with the Largest Excess Demand after Round 46:
(across all categories in each county)

20 Counties with Largest Absolute Change in Demand after Round 46
from Prior Round:
(across all categories in each county)

Change in Aggregate Demand in 100 Largest Counties by Round: (across all categories)
(Double click on legend to switch to a different county)


20 Counties with Largest Absolute Change in Demand in Category C1 after Round 46
from Prior Round:

20 Counties with Largest Absolute Change in Demand in Category C2 after Round 46
from Prior Round:

20 Counties with Largest Absolute Change in Demand in Category C3 after Round 46
from Prior Round:


Tracking Auction 108's Progress Toward Completion after Round 46


NOTE: Because the prior non-logarithmic chart is somewhat skewed by the large excess demand in the early rounds, we have repeated the chart above taking the log (base 10) of the values on both axeses:


NOTE: This next chart looks at changes in excess demand in dollars after removing the impact of round price increases. Please note negative scale. Also, this chart is not relevant for Round 1 because there are no prior rounds.

Comparing Auction 108's Progress to Prior FCC Auctions after Round 46

The chart below tracks auction progress (using the metric of excess demand as a percent of aggregate demand) against other recent prior FCC auctions.

NOTE: Any comparison between Auction 97 (the AWS-3 auction and an SMRA auction) and the other auctions shown (which are all clock auctions) needs several important caveats. SMRAs have a fundamentally different structures from clocks auctions (e.g., SMRAs allow bidders to bid for specific licenses whereas in clock auctions you bid for generic blocks; SMRAs determine provisional winners after reach round whereas clock auctions just determine aggregate demand at the end of each round). Participants in an SMRA also face different rules regarding the exiting of accepted bid (e.g., a provisionally winning bidder in an SMRA is allowed to submit a withdrawal bid subject to a withdrawal penalty whereas in a clock auction a bidder may not withdraw a bid once demand equals supply). Finally, in SMRAs, bidders do not need to affirmatively bid in every round for licenses that they have provisionally won as they will have an opportunity to bid again in the next round if their provisionally winning bid is outbid in the current round. These differences make any direct comparisons difficult. Nevertheless, with all these caveats in mind and using a simple moving average to “smooth” the variations in demand that you see from round-to-round in an SMRA, I thought that it might still be interesting to make a comparison between Auction 97 and this auction.

Fun: Comparing Current County Prices to Predicted Prices at the PEA-Level Based on Prior FCC Auctions after Round 46


In the bubble graph below, we attempt to track how current prices of the 100 largest counties mapped into their corresponding PEAs (on a price per MHz pop basis) compare to their "Predicted Price" based on past FCC auctions. To accomplish this comparison, we need to introduce the concept of the "Overprice Ratio". This Overprice Ratio is the current price of each county's PEA divided by the Predicted Price for that PEA.

The y-axis on the left shows the log (base 10) of the "Overprice Ratio." We take the log of the Overprice Ratio to lessen the impact of outliers. By definition, the New York PEA (shown in the graph as the biggest bubble in dark blue below), as the Nationwide Reference Market, will always remain at y=0 (the horizontal green line in the graph below). The y-axis on the right side of the graph tracks the current price for New York PEA (based on all the counties that fall into it) after the latest round and is adjusted so that New York PEA's price always remains on the green horizontal line in the graph below.

Example:
Pick San Diego County. It falls into the San Diego PEA (which only has one county in the PEA ). Its Reference Market is Los Angeles.

To get the complete list of Reference Markets, Predicted Prices and Overprice Ratios for any county see the table at the bottom of this web page.


Using this Overprice Ratio, we can then identify the licenses that represent the best "deals" at the close of each round. (5)
(5) Because these deals are based on historical comparisons at the PEA-Level, some caution is necessary. For example, a county that sits at the edge of a large PEA may look underpriced when comparing to the predicted price for the larger PEA in which it resides.

Deals Following Round 46: Most Underpriced Counties (Above 500K in Population) Relative to their Predicted Prices at the PEA-LEVEL:

(6) Calculations in the table below are based on 2010 Census figures unless designated with a "2020" in the column title.